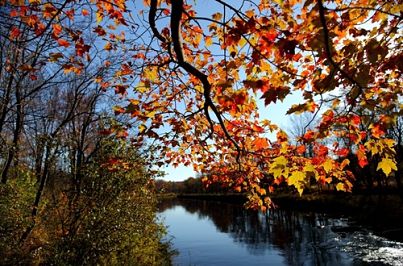 For most Americans, daylight saving time (DST) will end with a “fall back” to standard time on Sunday, November 3, at 2 a.m. Not such a bad thing, really.  We get an extra hour of sleep and an earlier sunset.  This may punctuate the end of one season but yet it marks the beginning of another.

Both the change in time and the need to calibrate our body clock is somewhat of  an “organic” wake-up call. With the shorter days and early darkness, the noticeable change can often make this transition difficult. It can wake us up both literally and figuratively.

But let’s consider the glass half-full thinking as we explore the benefits of morphing into a new season.  Change is in the air. We all can feel it.  Holidays are just around the corner and we can sense new energy and new possibilities. Seasonal changes are natural motivators for evaluating what changes you might want to make in your daily life. It’s a perfect time to explore what’s working for you and what is not.

Here’s just a couple of ways to inspire:

Now is an opportune time to take a quick tour of your closet and evaluate what you wear and what you never will. Take an inventory of your stuff. That fall sweater you saved from last year might look a little more ratty than you remembered.  Organize your closet by “like” categories, so that you can see what you are lacking.  Then, you can go shopping to add to your wardrobe without duplicating something you already have. Ditto to the shoes and boots.  If they can be salvaged, bring them to the shoe repair now, and not wait for the day you want and need to wear them.

Check the buttons on all of your overcoats and toss that lonely glove whose mate never turned up from last winter.  Maybe it’s time to purge the threadbare socks too.  Replenish.  Start fresh.  Organizing also means preparedness for the upcoming season. Be ready.

It’s not too early you begin thinking about the holidays. Take a small bite out of the bigger chunks of your grandiose to-do’s. Reduce the overwhelm by planning just a little bit ahead of what you did last year.  Anything you can do now may minimize the holiday havoc  later.

Productivity tip:  Albeit only an hour, this usually throws many people off schedule.  Technically, we gain an hour sleep but we rarely modify our bedtime, and so we generally feel more tired in the mornings. For the first week, try to acclimate to the hour change by making adjustments in your sleep routine. Resuming energy through any transition is always challenging.

So transition should not mean procrastinate until the snow day.  Make it an opportunity to not only re-stock, but take stock of yourself and your things.  It should mean get going, get with the change and march onward.

Don’t fall back.  Turn back the time, but not your locomotion.  Set your clocks back, but move forward. Embrace the season with opportunities for change in the physical, mental, and emotional sense.

So what changes are you ready for? What’s your secret for a smooth transition?